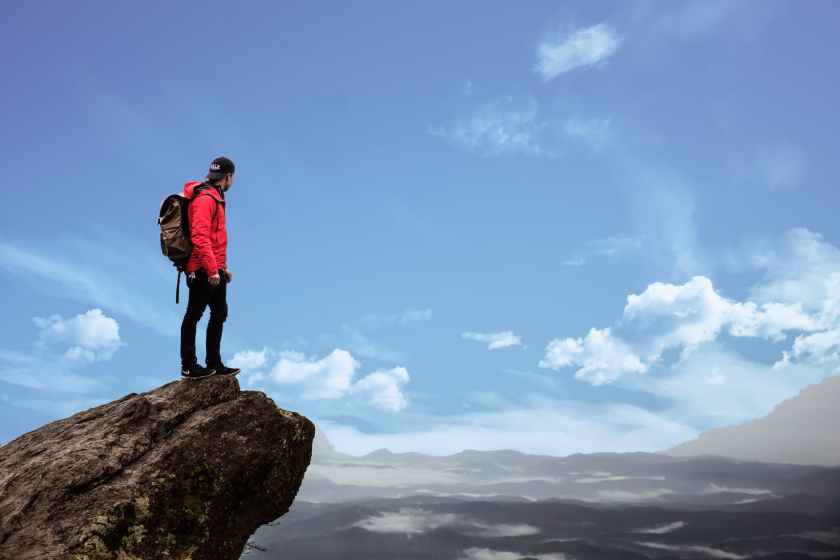 He who has overcome his fears will truly be free.

A friend recently asked me a question: “What is the last uncomfortable thing you did?”

And I didn’t have a great answer for them.
I said something about fitness, which to be fair, I have always had a really bad stamina for. I haven’t been overweight, or anything, I’d just not trained at all. So it has been uncomfortable trying to make it a part of my lifestyle.

I did, technically, have an answer, but it wasn’t much more than the average person’s goals.
Great goals, but mundane in execution.

I tend to be a fearful person by nature.
When a situation gets hairy, or i’m confronted with discomfort, I’m great at hiding. Or else somehow skating through with just enough skill so that I don’t have to really put myself out there. I figure, if  you never put yourself out there, you never risk failing, and that’s true. I don’t often fail, but I also don’t often take risks.
I couldn’t handle failing, so it’s easier to overthink.

Some of my biggest memories are from moments where I was forced out of my comfort zone, and had to show other people how bad at something I was. Whether that was dancing, or singing on stage without any training, or struggling to come up with adequate comebacks.

I have been pushed into situations where I was put on display knowing nothing (or very little) about what I was doing.

“What is the last uncomfortable thing you did?”

This one time I was at a civil war event.

You know the kind, where everyone is in costume, and there are tables full of nicks and knacks from the era. It’s pretty cool actually. My family attended one of these while I was early in my high school career. I was looking at tables of artifacts, and eavesdropping on people’s conversations. I was greeted by a man dressed as a soldier, and decided to chat with him for a moment. I expressed how I enjoyed these sort of events, because of the hands-on nature of history. Well, somehow he misunderstood me, and long story short he called up his manager, talking about adding me to their list of volunteers. He said “There’s a kid here who is interested in what we do.”

I backed out of that as soon as I realized what was going on, and tried to clear up what I meant with my comment. I said that “I like seeing the displays, and how things were done back then. I didn’t actually want to be a part of the event, I just liked the way they illustrated the way of life back then.”

So he pulls out a replica musket, and begins to show me some closeups. He then demonstrates some movements with it. Different forms of standing at attention and whatnot. He then hands it to me and has me to it. It’s pretty cool, a little more of an invasive show and tell then I was prepared for, but still pretty cool. I look around and see a couple people start to stop what they’re doing and gather around while he’s talking.

Once he runs though a couple movements with me, he calls over a few of his buddies, (also in costume), and tells them to get into formation. Leaving me stuck in the middle of them.

By now, there is a small crowd gathered around watching this demonstration, and they start pulling out phones and cameras.

The man acting commander then proceeds to shout out commands, and everyone follows suit acting out the movements that I was just walked though.

So basically, I’m forced into performing with these reenactors, barely knowing the commands he’s giving. Video being taken and photos being captured by a small crowd of people, including my mom.

I figured “that’s what you get for trying to be friendly and talk to someone.”

I tell myself that next time I go to one of those things, I’m going to keep my comments, and hands to myself.

All of this to say, that I tend to find myself thrown into situations I didn’t intend. Having to learn to laugh something severely uncomfortable off, and pretend it didn’t happen.

Eventually I learned how to fake it and crack jokes as a distraction until I got the hang of something. Then I wow people with the simple stuff by adding some flourish. Then they never know how little I actually know. The only downside is once I get good at something, I tend to platou, because now that I know how to do that thing, there isn’t anything else to learn. But on the plus side, no way for me to embarrass myself.

I find it very difficult putting myself into situations where I don’t know what’s going on. Experience tells that when I don’t have all the cards, they tend to play out against me. It’s entertaining for everyone else, but it’s extremely embarrassing for me.

Now that I’m older and can choose what things I show up to, or what I involve myself with, I don’t have to jump out into uncharted waters.

I can decide to be comfortable, but yet that in itself is torture. I can’t stand living a mundane life.
Ironically, I end up trapped living my life going about everyday things. Stuck in the average, lost in the vast numbness.
I’m dying for something more.

So on the one hand, I can try to learn to be okay with a boring civilian life. Give in to the numbness, and get my excitement from small things. A new flavor of pop tart, or another new sequel at the movies.

I can do the most terrifying thing and jump out into unknown waters. Do something crazy or even just a little interesting, but certainly not normal. But in this hand, I have to learn to be okay with not being the smartest or strongest in the room. I have to deal with this diabolical humiliation of not being the rule. Not calling the shots, and not knowing what’s going on.

I know what the right answer is, but this isn’t a movie or something. This is my real life I’m talking about, and I’m not sure I can commit to something like that.

But that in itself is terrifying.

Do I live as a confident coward trapped in the mundane, or get the legs kicked out from me? Humiliated, but actually living my life?

He who has overcome his fears will truly be free

What are your thoughts?
What sort of stuff do you find helps you get over your fears, or your insecurities?